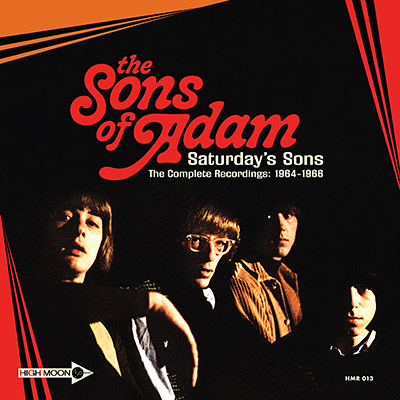 Led by visionary guitarist Randy Holden (Blue Cheer, The Other Half) and featuring charismatic frontman Jac Ttanna (Genesis), bassist Mike Port, and drummer Michael Stuart-Ware (Love), The Sons of Adam were a lean, mean rock ‘n’ roll machine, lighting up the Sunset Strip alongside such groundbreaking icons as The Byrds, Buffalo Springfield, The Doors, and The Mothers of Invention. Schooled in surf and emboldened by the British Invasion, the band earned a reputation as a fearsome live act, known for blowing fellow artists off the stage with their high energy performance and voluble power. The quartet enjoyed a brief but incandescent three-year career, fueled by a fervent fan following who flocked to such world-famous Hollywood haunts as the Whisky A Go Go, Bido Lito’s, and Gazarri’s to thrill to their explosive sounds and passionate intensity.

Saturday’s Sons: The Complete Recordings 1964-1966 gathers The Sons of Adam’s complete studio output – spanning rare 45s, outtakes, and demo recordings – including fiery material from their early incarnation as The Fender IV as well as their fabled 1966 single, “Feathered Fish,” donated to the band by Love’s Arthur Lee. Most significantly, Saturday’s Sons features a previously unreleased 1966 full concert performance from San Francisco’s famed Avalon Ballroom – a vintage recording so exciting and powerfully dynamic that few will be in doubt of The Sons of Adam’s lost potential. In addition, Saturday’s Sons: The Complete Recordings 1964-1966includes a definitive 15,000-word chronicle of the group’s unfulfilled reach for the brass ring by Grammy®-nominated compilation producer Alec Palao, featuring the full cooperation of the band members and associates, and showcasing a stunning range of rare photos, poster art, and other previously unseen images

“We were so young and fucking immortal. Live, we were pretty damned incredible. I looked forward to getting onstage every night.
It was my total life.”—Randy Holden